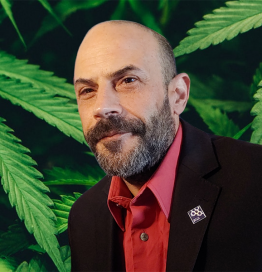 Tony has been involved in the cannabis industry for 15+ years, a long-time patient advocate and organizer with Americans for Safe Access (ASA). He’s currently Chair of the Bay Area Safe Access chapter.

He was a plaintiff in ASA’s successful lawsuit against the California Highway Patrol. As an original member of the SF ASA Chapter, he played a role in passing Article 37, SF’s medical cannabis law.

He has been involved with multiple successful cannabis operations, and political campaigns, including the passing of The Medical Cannabis Regulation and Safety Act (MCRSA), which was established through a series of bills passed by the California State Legislature in 2015 and 2016, as well as The Brownie Mary and Dennis Peron Act bill SB 34 in 2019, which allows cannabis to be given out as compassion. He is currently involved in legislative efforts at a local, state, and federal level to expand and strengthen patient access to cannabis.