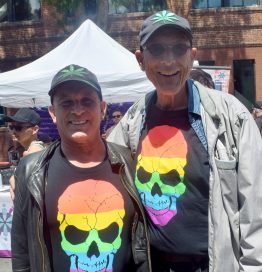 David Goldman and Kenneth (Michael) Koehn have lived in San Francisco for nearly 50 years. After careers in teaching and gardening respectively, they became active in 2007 in the San Francisco chapter of Americans for Safe Access. In 2013, they became active in the Brownie Mary Democratic Club, devoted to cannabis policy reform. David and Michael serve on the boards of The Green Cross, and David also serves on the board of California NORML.